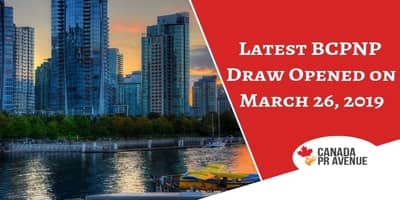 British Columbia province of Canada has finally launched much awaited BCPNP draw on March 26, 2019. The draw for skilled worker category was awaited since last 20 days as the last draw for this particular stream was out on March 5, 2016. Although the BCPNP (British Columbia Provincial Nominee Program) was launching its Tech Pilot stream draws and Entrepreneurs stream draws, however, the skilled worker was the one that is most popular among the Canada immigration aspirants with skilled work experience.

The British Columbia Provincial Nominee Program issued a total of 265 invitations in March 26 draw. Out of the total number, 242 invites were sent to candidates under Skilled Worker and International graduate streams, whereas, 23 invitations were issued under Entrepreneur immigration stream.

The province of British Columbia has revealed the minimum score requirement in the draw, however, it has not mentioned the number of invites sent separately to the skilled worker and International graduate streams. The invites in the current BCPNP draw were sent to the following categories, i.e.

The BC issued 23 invites under Entrepreneur Immigration stream with a minimum point score requirement of 106 points.

Express Entry stream of BCPNP is the largely popular stream among the applicants. If you apply and get selected for nomination via this stream the BCPNP allocate you the nomination for Canada PR and subsequently, you get 600 additional points in the Express Entry System. Hence, to apply in this stream, you need to have an account in the federal Express Entry immigration system of Canada.

Get professional assistance to apply in the best PNP in 2019

The Provincial Nominee Programs (PNPs) of Canada offers a crucial pathway to get permanent residency in Canada, especially to the candidates with low CRS (Comprehensive Ranking System) in the federal Express Entry System. If you want to apply in best provincial nominee program of Canada based on your profile this year, you may contact the certified Immigration professional at Canada PR Avenue for complete help, assistance, and support.

To confirm the eligibility requirements and start the PNP process, you may get in touch with our Canada immigration expert by sending an email at e-mail id- [email protected].  Alternatively, fill the free assessment form to receive the call back from the expert.