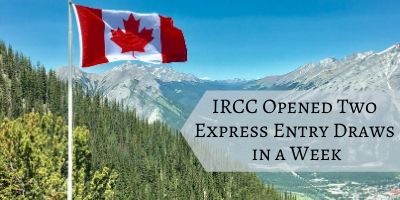 The Immigration Refugees and Citizenship Canada (IRCC) is determined to meet annual immigration targets set by the government for 2020 and hence, it continues to invite candidates and even opening the back to back draws whenever required, despite the row over the recent pandemic.

With these two draws, the total number of ITAs issued by the Federal Government so far in 2020 via the Express Entry program has reached up to 22,600 invitations.

The draw opened on 23rd March is the second EE draw held within five days followed by the 18th march draw and is also the second of its kind since 2015, being a specific draw for Canadian Experience Class (CEC) candidates.

The humongous number of candidates were invited to apply for Canada PR in this draw (i.e. 3,232 ITAs in a single draw), considering the lesser invites in the previous draw.

This fall in the minimum score requirements is a result of ITAs being issued to a smaller pool of candidates, in comparison to larger draws, where all three EE categories are targeted.

The tiebreaker rule applied in the 23rd March draw was on November 25, 2019, at 14:00:35 UTC. This clearly indicates that all the candidates under the Canadian Experience Class, who have scored 467 points or above and have entered their EE profile in the pool before the said date and time have received an ITA for Canada PR.

In the 18th March draw, a total of 668 Express Entry candidates was invited to apply for permanent residence from IRCC. Though the ITAs were received on 18th March itself, the immigration office had released the details on March 20.

In this draw, the minimum CRS score requirement was 720 points. Since all the invited candidates had their provincial nomination certificates, they got 600 additional CRS points towards their overall score.

So, even with a relatively high score requirement in comparison to the last EE draw that required 471 points, the inclusion of candidates with provincial nominations has eased out the process for them.

In this draw held on 18th March, the IRCC has applied a tie break of March 19, 2020, at 02:04:06 UTC.This clearly means that the express entry candidates, who had 720 CRS points (with provincial nomination)or above and had entered their EE profile in the pool before the said date and time have received an ITA.

With a team of experienced Canada visa consultants and advisors, Canada PR Avenue has an admirable track record of clients who have obtained Canada PR approvals in first attempts.

Being a leading Visa Consultancy Company in India, our team is dedicated to imparting the right advice and guidance to our clients who are applying for Canada PR.

If you are willing to apply for Canada permanent residency, then fill out our free profile assessment form to find out your eligibility for the right immigration program. Our team assesses your profile and accordingly, helps you choose the best pathway on the basis of your profile details.