PNPs of Canada have Issued about 1,400 Invitations to Candidates in an Express Entry Pool in Less Than a Week 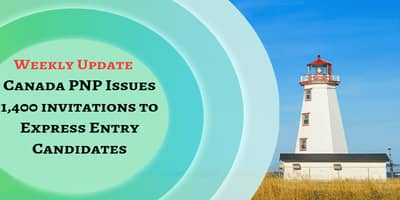 There is a surge in the number of invitations issued under Canada’s Provincial nominee streams linked to an Express Entry pool. About 1,400 candidates have got their ITAs in merely five days time, making them eligible to apply for Canada PR via provincial nomination.

Under Ontario s Human Capital Priorities Stream, total 1,072 NOIs were issued to Express Entry candidates who have past work experience in the following 10 occupations:

While Nova Scotia issued a total of 312 LOIs under Human Capital Priorities Stream to Express Entry candidates who have relevant work experience under NOC 4214 Early Childhood Educators and Assistants.

Have a look at the table listed below:

Candidates who meet province s eligibility requirements are the ones who will get selected by Canada’s provinces and territories under the federal Express Entry system, as it is one of the key systems that paves the path for foreign skilled workers towards obtaining Canadian permanent residency status.

Following are the key streams managed under the federal Express Entry pool:

With the onset of May, major streams of Canadian Province have issued more than 2,000 ITAs to express entry candidates for a provincial nomination, including:

As per senior partner of the Campbell, Cohen Canadian immigration law firm David Cohen, "Nobody can accuse Canada’s provincial nominee programs of being boring and the past few weeks have provided ample reasons why this is the case,”.

He also stated that “More importantly, PNPs are exhibiting a new level of transparency as to the kind of candidates they are after. This information is vital and allows immigration candidates to know which provinces may be looking for their specific skills and experience.

Dreaming to move to Canada as a Permanent Resident? Choose the right PNP with the Assistance of Canada PR Avenue

To find out your eligibility for the right PNP pathway, you can visit the website and fill out the free assessment form. Alternatively, email your queries to our email id- [email protected].