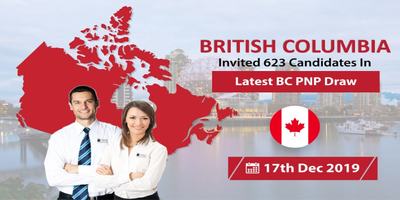 Let’s find out more details about the latest BC PNP draw.

However, the BC has not revealed any details regarding the separate allocation of the invites to the candidates under each category.

Province of British Columbia, Canada also launched tech pilot draws of BC PNP this month. The most recent Tech Pilot draw took place on 10th December 2019 to issue a total of 53 invitations.

The BC has launched the Entrepreneur immigration draws quite frequently this year.

You can get Canadian PR through a provincial nominee program in a relatively easy manner. Express Entry stream of a provincial program allocates 600 additional CRS points to an applicant who applies and gets the provincial nomination through this stream. Such a huge addition of points guarantees that you get an invitation to apply for Canadian PR from IRCC.

In case your CRS point score in express entry system is not high enough to obtain an invitation to apply from IRCC, you may apply for a provincial nomination through a provincial nominee program, even with a low CRS (Comprehensive Ranking System) Score. To get complete process assistance to apply for the best PNP based on your profile, you may contact qualified Immigration Counsellors and experts at Canada PR Avenue.

The Canada PR Avenue team offers the best support and assistance in visa filing, documentation, selection of right PNP, etc. It is a leading and registered Visa Consultancy Company in India, specialized in Canadian immigration and permanent residency process.

To start the process at earliest, you may call Canada PR Avenue migration experts on Toll-Free Number- 78-18-000-777. Moreover, to get your eligibility checked and subsequently, receive a call from the expert, you may fill the free assessment form.