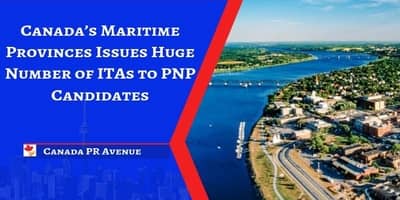 As per the report released by the APEC (Atlantic Provinces Economic Council), Canada s maritime provinces namely Nova Scotia, New Brunswick, and Prince Edward Island have recently witnessed one of the fastest population growth in decades.

Lately, it s been observed that all these maritime provinces have been using immigration as one of the key driving force to attract and retain skilled foreign workers and their families. Moreover, for the past few years, immigration has emerged as a key solution to solve major issues faced by these provinces, like the decline in the labour force and population growth.

According to the APEC report, among all the Canadian provinces, Prince Edward Island has experienced a high population growth rate of 2 percent year-over-year since 2016. Immigration has been a key contributor to the province s growth and the province has recorded the highest number of immigrants in Canada between 2016-2018, comparable to its population size.

Only New Foundland and Labrador provinces of Canada have reported a negative growth rate and a decrease of 0.2 percent in the yearly population growth.

As per the APEC report, between 2016 to 2018, total 22,000 new immigrants have come to Canadian Atlantic provinces via Provincial Nominee Programs, making it one of the biggest sources of new immigrants. PNPs allow all the Canadian provinces to nominate a set number of economic immigration applicants every year to apply for Canadian permanent residence visa.

For about two years ago, the Atlantic Immigration Pilot was also launched, which solely brought a batch of 1600 new immigrants to Canada s Atlantic provinces. Under this program, all the employers in the Atlantic provinces can hire foreign workers to fill the vacant position that they are incapable of filling locally.

The APEC report has also stated that it will be nearly impossible to predict the sustainability of the population growth rate of all these maritime provinces of Canada in the near future.

Confused about the Whole Process of Applying via PNP? Visit Canada PR Avenue!

Provincial Nominee Programs offer a wide range of options for skilled professionals to immigrate to Canada. If you are also interested in applying via PNPs, then Canada PR Avenue can guide you to choose the best course of action. The detailed information and latest Canada immigration news can help you take an informed decision.

You may fill our free profile assessment form to confirm your eligibility and our ICCRC registered immigration consultants will connect you over the phone or can schedule an appointment to discuss the process in person.