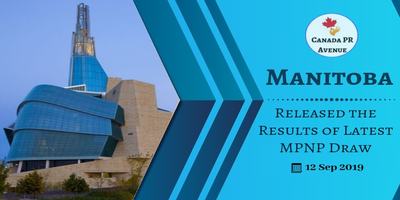 Manitoba has conducted a new draw, where the province has issued a total of 347 LAAs (Letters of Advice to Apply) via three of its provincial streams.

The 12th September MPNP (Manitoba Provincial Nominee Program) draw had focused on its Skilled Workers in Manitoba stream. Under this stream, MPNP has issued a total of 254 LAAs with the minimum CRS score of 545 points.

Total of 53 LAAs were issued to the Skilled Workers Overseas stream under the Strategic Recruitment Initiative (SRI). Under this stream, the minimum CRS score of 706 points is announced.

At last, the remaining 40 LAAs were issued to the candidates who fall under International Education Stream.

Details of the previous MPNP draw held on 15th August were also announced on 12th September. Total of 360 LAAs were issued in that draw.

Total 241 LAAs were issued to candidates under the Skilled Workers in Manitoba stream with the minimum CRS score of 542 points.

Total 83 LAAs were issued to candidates under a Skilled Workers Overseas stream under SRI with a minimum CRS score of 685 points.

While the last set of 36 LAAs were issued to candidates under International Education Stream.

The Manitoba Provincial Nominee Program selects skilled workers, recent graduates, business people who have a clear intention as well as the ability to settle and establish themselves economically in Manitoba as permanent residents.

There are two MPNP for Skilled Workers streams:

You cannot apply to the MPNP if:

If you wish to move to any province of Canada as a permanent resident? Worry not, we ll guide you!

Get in touch with our team of visa and immigration consultants at Canada PR Avenue to get complete assistance and guidance.

Firstly, get your profile assessed by filling out the free assessment form based on which we ll suggest the right pathway to apply for Canada PR visa.

From documentation to visa follow-up, we ll assist you at every step.

For assistance, drop us an e-mail at [email protected].