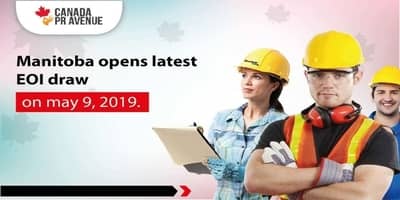 Manitoba Province has announced its EOI based PNP results on 9th May draw. The province has issued a total of 170 new ITAs for a provincial nomination to the candidates underskilled workers and international education stream.

Out of total 170 invitations, 15 invitations were issued for Manitoba skilled workers category for the candidates who possess a valid federal Express Entry profile and a job seeker validation code.

With the announcement of this latest draw, this year s total ITAs count goes up to 4,071.

Have a look at the figures below:

Candidates have to register their EOI profile under the MPNP to be considered for a nomination from the Manitoba province under the relevant streams of MPNP, i.e. Skilled Worker Overseas, Skilled Worker in Manitoba streams and International Education Stream, etc.

The EOI profile of the candidates is then awarded points on the basis of key factors like age, educational qualification, language proficiency and connection with Manitoba. Then a Letter of Advice to Apply is issued to the candidate with the highest rank through the regular invitation rounds.

If the candidates nomination under an express entry aligned stream of MPNP is approved, then he/she gets an additional 600 CRS points in an express entry system, which can help improve the overall point score of the applicant to receive a federal Invitation to apply for Canada PR from IRCC in the future Express Entry Draw.

To find out your eligibility for the most preferred Provincial Nominee Program, you can visit Canada PR Avenue and fill the free assessment form.

Canada PR Avenue is nothing less than an almanac of Canadian Immigration world. By scrolling through the dedicated Web Pages, you can get your hands on latest draw results for Express Entry and PNPs and the news about latest changes in Canadian immigration laws and policies will also grab your eyeballs.

Apart from news updates, you can also clear your doubt about the different steps to follow while applying for a Canada PR visa. For further queries or feedback, you can drop an email at [email protected].