Saskatchewan opened its EOI based SINP Draw on 27th February 2019 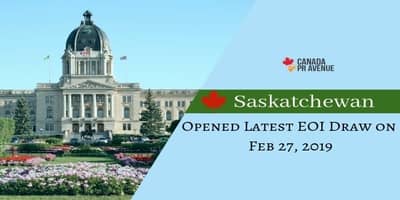 Canadian province Saskatchewan has opened Expression of Interest-based draw of its Provincial Nominee Program on February 27, 2019. The Saskatchewan Immigrant Nominee Program (SINP) took more than a month to open its second EOI draw of the year. However, unlike most of the past draws of SINP, this time around the province focused on inviting candidates only under Express Entry Subcategory.

In the latest draw of the SINP, occurred on February 27, 2019, Saskatchewan invited 83 candidates under its Express Entry aligned stream, i.e. Express Entry subcategory. The score of the lowest ranked express entry candidate (who submitted EOI in SINP system) was 68 points. However, no candidate has been invited under the other popular stream of Saskatchewan Immigrant Nominee Program, i.e. Occupation in Demand Stream.

Saskatchewan started the EOI (Expression of Interest) interest based system for both OID and express Entry subcategory of its PNP in the year 2018. As per the new EOI system, the applicants need to create their EOI profile in the online system of SINP and after that the province issue the invitation to apply for provincial nomination to the selected applicants through its periodic draws. Since the start of the EOI system, the province of Saskatchewan has been inviting the applicants under both Occupation in Demand and Express Entry subcategory. However, this time around it opened the draw for only Express Entry aligned stream and invited 83 express entry applicants.

The province of Saskatchewan has launched its SINP draw after more than half a month, which is a considerable delay considering the frequent pattern of EOI draws openings in the past. The other noticeable thing in this present draw was, it was opened only for Express Entry subcategory and invited 83 candidates from EE pool to apply for provincial nomination. The score of the lowest ranked candidate in SINP pool was 68 points.

Saskatchewan invited candidates under Express Entry subcategory in the latest draw. The EE streamed the SINP is one of the best methods to obtain provincial nomination and then PR in Canada based on the same. If you are applying in the SINP- Stream and able to obtain the provincial nomination, you get 600 additional CRS points as a reward, which helps you get the ITA (Invitation to apply) for Canada PR from Immigration Refugees and citizenship Canada (IRCC).

Need further assistance about SINP process- get in touch with the expert?

If you wish to apply in SINP or any other relevant provincial nominee program to get permanent residency in Canada in the year 2019, you may contact the certified immigration expert at Canada PR Avenue for inclusive assistance and support.

To confirm the eligibility requirements and start the PNP process, you may get in touch with our Canada immigration expert by sending an email at e-mail id- [email protected]. Alternatively, fill the free assessment form to receive the call back from the expert.