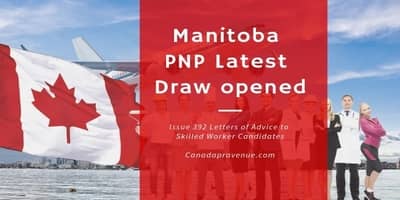 Manitoba – a key province of Canada has opened the latest EOI based draw of its PNP, i.e. Manitoba Provincial Nominee Program (MPNP). In the latest MPNP draw launched on September 28, 2018, the province of Manitoba issued as many as 392 Letters of Advice (LOAs) to the candidates under skilled worker stream.

The LOA invitations have been sent to the candidates under different sub-categories of MPNP, i.e. Skilled Worker in Manitoba and Skilled Worker Overseas Stream.

In this draw, as many as 201 Letters of Advice issued under skilled workers in Manitoba stream. The minimum point score requirement was 679 points. Moreover, under Skilled Worker overseas stream (Strategic Recruitment Initiative), total 31 LOAs were issued with qualifying marks being 713 points.

To know about the latest MPNP draw opening or immigration rule changes, you may visit Immigration News Section on Canada PR Avenuewebsite on a regular basis.