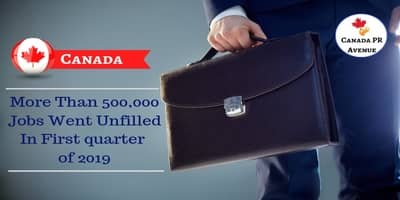 The first quarter had again witnessed a rise in the number of Canadian job vacancies in six of its provinces and Nunavut territory. If we go by the statistics, then Canada has seen nearly 80% of openings in permanent job positions, reaching 506,000 in the first quarter of 2019.

This shows a leap of 44,000 in comparison to the figures achieved in the first quarter of 2018. With these figures, this quarter has become the tenth quarter in a row to attain the year-over-year rise in job vacancies figures and overall vacancy rate.

Due to labour shortages faced by Canadian employers, which is caused by an ageing population, the federal government has decided to boost the immigration levels by 2022 and is expecting to welcome large numbers of immigrants via its economic-class immigration programs.

Where are the Most Unfilled Jobs in Canada?

Quebec tops the chart with the highest numbers of job vacancies in the first quarter of 2019, marking a rise of 23%, i.e. 21,400 job vacancies in total. As per the statistics, three sectors which are affected, include, health care and social assistance, accommodation and food services and manufacturing.

If you want to live and work in Canada Permanently, Fill Our Free Cananda Assessment form and get free advice from our Experts Now!

Vacancies up in British Columbia as well

With a yearly increase of 9,300 vacancies, British Columbia has also seen a rise in the number of job vacancies in professional, scientific and technical services and transportation and warehousing sectors.

Statistics Canada said, "79.9 percent of job vacancies in the first quarter of 2019 were for permanent positions, similar to the amount recorded in the first three months of 2018. Permanent employment is often associated with higher wages, more benefits, and a higher possibility of unionization and training offered by the employer than temporary employment.”

As per a report issued by Statistics Canada, “The average offered an hourly wage for vacant positions in the sector increased by $1.20 (4.2 percent) to $30.10, the highest offered wage among the 10 largest industrial sectors."

Important: How to Get Job in Canada from India 2019?

Find out your eligibility for any immigration programs, connect with a team of Canada PR Avenue

We understand how meaningful it is to secure full-time work for a new immigrant to Canada. With a high job vacancy rate in Canada, it is a great opportunity for those who consider applying for a Canadian PR visa in 2019.

The fastest way to obtain PR status of Canada for skilled workers is via the Federal Express Entry system. Interested candidates can get their profile assessment done by filling a free assessment form. One of our immigration advisors will evaluate your profile and get in touch with you shortly.