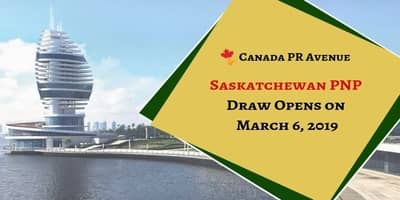 The Saskatchewan province of Canada held 5th EOI (Expression of Interest) draw of its PNP, i.e. Saskatchewan Immigrant Nominee Program (SINP) on March 6, 2019. The draw invited 138 candidates under its Occupation in Demand (OID) and Express Entry Subcategory. SINP is considered as one of the best Provincial Nominee Programs (PNPs) of Canada to obtain the permanent residency in Canada through provincial nomination.

Let’s find out more about the latest SINP draw.

With this latest draw on March 6, the number of total invitations issued by the province of Saskatchewan this year has reached to 817. The interesting fact about this draw was that it was launched in a week time only of the last EOI draw held on 27th February 2019. In the draw opened last month, the provincial government of Saskatchewan only invited 83 candidates under Express Entry stream and not the applicant was selected from Occupation in Demand stream of the PNP.

In the latest draw, SINP issued 68 invitations to the candidates under Occupation in Demand subcategory with a score of the lowest ranked candidate being 81 points. Moreover, 70 invites were sent to applicants under Express entry stream with minimum point’s requirement being 67 points.  Both these streams are largely popular among the Canadian PR aspirants, which is evident from the huge number of application received every year for these two streams of the Saskatchewan PNP.

Benefit of Applying in SINP

As discussed already, both SINP streams are most desired PNP streams and this is the reason thousands of applicants get the provincial nomination from the province of Saskatchewan through these two streams. The key benefit to apply in these streams is that they don’t demand the job offer from a Canadian employer from the applicants.

Also, the Occupation in Demand subcategory require low English language proficiency as well, i.e. CLB 4. Hence, the applicants who hesitate to apply for Canadian permanent residency due to their low IELTS score can choose to apply in the OID stream, provided they have their occupation listed in the SINP in-demand occupation list.

Get provincial Nomination for Canada PR through SINP

If you wish to get the provincial nomination for Canadian PR this year, you prepare your file and apply in SINP or any other relevant provincial nominee program of Canada in coordination with a qualified and experienced Canadian immigration expert. You may contact the certified Canada migration expert at Canada PR Avenue for inclusive assistance and support in the SINP process.

To confirm the eligibility requirements and start the PNP process, you may get in touch with our Canada immigration expert by sending an email at e-mail id- [email protected]. Alternatively, fill the free assessment form to receive the call back from the expert.