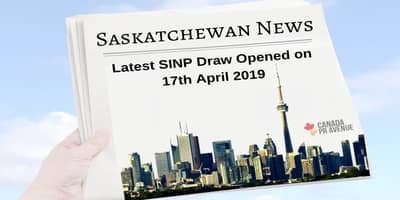 Saskatchewan Immigrant Nominee Program (SINP) opened its latest EOI (Expression of Interest) based draw on April 17, 2019, to issue invitations under its key streams, i.e. Express Entry and Occupation In-Demand streams. The province of Saskatchewan also revised its SINP in demand occupation list on 17th April only, removing some key occupations from the list. Let’s find more about the key updates from the PNP.

First time in the history of Saskatchewan EOI based draws, the province invited the candidates having experience in some targeted occupations of the SINP occupation list. The current SINP draw targeted below key occupations from the occupation list:

Three of the above occupations (starred) were added on 3rd April update to the SINP In-demand occupation list.

Invitations Issued in the Saskatchewan Draw

The province of Saskatchewan invited total of 324 candidates in the present EOI based draw. Out of the total number, 210 candidates received invite under Occupation in-demand category with qualifying marks being 60 points this time around.

Moreover, 114 invitations were issued to applicants under the express entry stream of the Saskatchewan Immigrant Nominee Program.

The province has revised the Saskatchewan High Demand Occupation list on April 17, 2019, by removing the four targeted occupations in the current SINP draw, i.e.

With the removal of above four occupations the SINP occupation list now has a total of 20 occupations. Find below the updated list of occupations.

Get Canada PR nomination through SINP- Call an expert for assistance

If you need further clarification about the SINP draw or revised occupation list or wish to apply in Saskatchewan Immigrant Nominee Program (SINP) this year to obtain the nomination for Canada PR, you may contact the certified Canada migration expert by dropping an e-mail at [email protected].

Alternatively, to get details about most apposite immigration program based on your profile and apply Canadian PR in the year 2019, you can fill the free assessment form and receive the call back from our qualified Canada Immigration Expert.