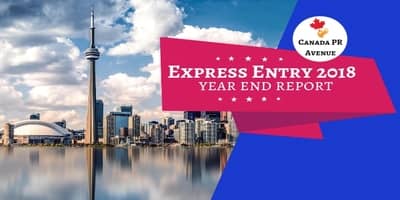 As per the 2018 year-end report issued by IRCC on 2nd July 2019, more than 92,000 new permanent residents have been admitted to Canada via its Express Entry system. This marks an overall rise of 41% in the previous year s numbers.

This came as a result of higher admission targets set by the Canadian Government under key Federal High Skilled economic-class immigration streams, including:

As per the report, around 280,000 Express Entry candidates submitted their profiles in 2018, out of which, 70% were eligible for any one of the above-stated programs.

Canada’s overall admissions target in 2018 raised for all the 3 programs which are managed by the Express Entry system. Canada has also expanded PNP admission targets up to 55,000 in the year 2018. All the numbers are set to rise further by the end of 2021. 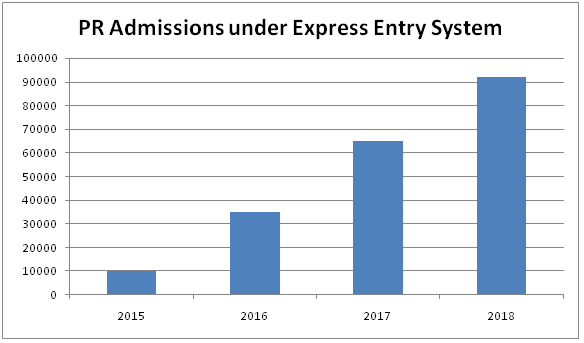 How the Express Entry System Works?

An Express Entry system of Canada manages the candidate pool for three key programs, including Federal Skilled Worker Class, the Canadian Experience Class, and Federal Skilled Trades Class. Eligible candidates, then enter into the pool where they get ranked on the basis of a CRS score that is awarded to them as per a few key selection factors, like, age, education, proficiency in English or French and skilled work experience. The candidates with higher-ranked have then issued an ITA for Canadian permanent residence via regular draws from the Express Entry pool, which take place in every two weeks.

Who Got most of the ITAs?

Tables stated below will give you a fair idea about the figures:

How Many PNP Invitations were Issued?

A provincial nomination is one of the most valuable factors under the EE system and provides an additional 600 CRS points to the candidates who receive a PN, effectively ensuring an ITA for Canadian PR.

In 2018, total 10,802 Express Entry candidates with a PN received an ITA, which amounted to 12% of all ITAs issued in the year 2018. Provinces like, Ontario, New Brunswick, British Columbia, and Nova Scotia saw a rise increases under this category, with Ontario recording a rise of 3,082 ITAs. Out of total 122,247 applications, 78,838 applications had listed Ontario as their province of choice.

Being a leading Canada PR consultancy firm in India, Canada PR Avenue can help you understand all that is required to successfully apply for PR visa application and obtain Canadian PR in a hassle-free manner.

Simply fill out the free assessment form or call us at [email protected] for expert guidance and support.