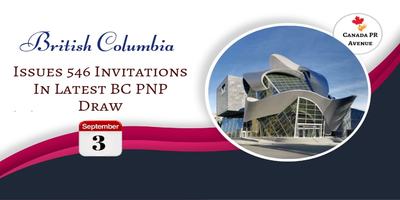 British Columbia has issued 564 invitations to apply for the provincial nomination in this latest draw. Candidates who have received ITAs fall under the following streams of BCPNP (British Columbia Provincial Nominee Program):

BCPNP has only released its minimum CRS score requirements, no detailed bifurcation of ITAs as per different streams has been announced by the province.

The province has also announced the results of its Tech Pilot draw which was held on 27th August 2019. In this Tech Pilot, the BCPNP had issued total 63 ITAs under 4 BCPNP streams, which includes, SI- Skilled Worker, SI- International Graduate, EEBC- Skilled Worker and EEBC- International Graduate streams. For all the streams, BCPNP has decided upon a common minimum score requirement of 90 points.

A PNP is undoubtedly one of the fastest and easiest pathways to obtain Canadian permanent residence visa. It helps you obtain provincial nomination to apply for Canadian PR even with low CRS score. In case you wish to apply for any PNPs, but you are not sure about your profile s eligibility, then you may get in touch with Canada PR Avenue s team of expert immigration consultants and advisors.

To get your profile evaluated and choose the right PNP pathway, you have to fill out our free assessment form online. One of our experts will review your profile and discuss with you the possibilities either over a phone call or face-to-face.

For any queries or concerns related to our process and payments, you may drop us an e-mail at info@canadapravenue.com and one of our representatives will come back to you shortly.