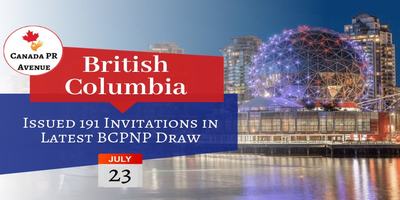 Refer the table below for the minimum score requirements for all the streams for which invitations were issued on July 23, 2019:

For the month of July 2019, this draw has issued 2nd highest number of invitations after the 9th July draw, which was 218 invitations issued.

Following is a list of last few BCPNP draws launched in the month of July 2019:

If an applicant achieves or exceeds the below-mentioned registration scores, then he/she is guaranteed to get an invitation to apply in the upcoming draw for the selected category. ITAs may be issued for scores that are lower than the below minimums as well.

BC PNP periodically invites the highest-scoring applicants in each category in order to apply under the BC Provincial Nominee Program (BC PNP). Then the province nominates eligible applicants to apply to IRCC for permanent residency.

The number of nominations totally depends on different programs and key economic factors, like the B.C. Labour Market, need annual allocation, previous nomination trends, and present application inventory stages. For instance, the allocation is 6,500 for the year 2019.

Wish to apply for Canada Provincial Nominee Program in 2019?

Connect with our team of immigration consultants at Canada PR Avenue and get expert guidance at every stage.

Fill out the free assessment form and get your profile assessed to confirm your eligibility for the desired PNP.