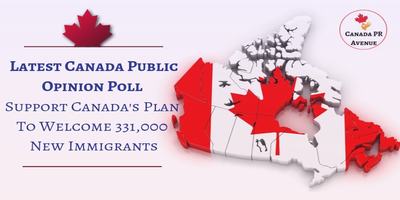 As per the new public survey conducted by Angus Reid Institute, more than half of the Canadian population is in favor of Canada’s new immigration target to welcome 331,000 newcomers. In fact, they wish to welcome the number by 2020.

Out of 1,522 Canadians who were surveyed, a total of 39% of people said that the set targeted level is right while 13% of people feel that it could be higher. For 40% of people, the target is quite high and the remaining 8% were not sure about the figures.

This poll has been conducted by Angus Reid Institute right before the onset of Canada s 43rd federal election to be conducted on October 21, 2019.

Immigration is one of the top five agendas that Canada’s main federal parties are focusing on. Since the target of welcoming 330,800 new permanent residents in 2019 was set by the government of Justin Trudeau, there is a chance of rising by 341,000 in the year 2020 under the new multi-year immigration plan.

How Political Support And Immigration Views are Related?

According to the Angus Reid survey, there is a variation between the public s opinion about the current targets. As mentioned, nearly two-thirds of people polled that this target of 331,000 new immigrants is too high. While 60% are planning to support only the Liberals and said that the target numbers are satisfactory.

According to the survey, there is a regional division as well across Canadians as to whether this target of immigration is acceptable or not.

The Angus Reid Institute also conducted a survey to understand the public s views on the economic benefit of this immigration target and a clear division of opinions has been found. At least seven out of 10 people feel that the economic growth of Canada is directly linked to immigration and they are planning to vote for the NDP, Green or Liberal, while 43% are in favor of the Conservative Party of Canada.

No Clear Stand For Best Leader

Respondents were divided between the Trudeau government’s management of immigration policies. Around 48% said that Trudeau had done fairly well, while 52% says that it was not good.

Around 93% of Conservative voters said the Government had done very poorly with regards to managing immigration policies.

For the poll conducted as to which leader is the best to manage immigration of Canada, the Angus Reid Institute s poll results stated, “there was no clear choice.”

Do you wish to move to Canada as a permanent resident? Consult immigration experts at Canada PR Avenue

For a free profile assessment to guide you with profile creation and application filing, we provide a comprehensive range of visa and immigration services. To connect with our team, you may drop us an e-mail at [email protected] and we ll connect with you over a phone call shortly.