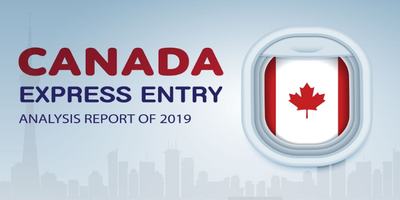 Last year 2019 was a roller-coaster ride for candidates under Canada Express Entry system. The Canadian government has issued total 85,300 invitations to apply in 2019 for Canadian Permanent Residency and has grabbed the position of second-highest invitation issuing year as a whole since 2015.

There were a total of 26 Express Entry draws held by the federal government of Canada under immigration ministry, Immigration, Refugees and Citizenship Canada (IRCC) in 2019 and 24 draws out of total draw issued the huge number of invitations ranging from 3,200 to 3,900.

As per the Canada’s government plans of reaching higher admission target between 2019 and 2020 for all three Express Entry-managed skilled programs as well as PNP, it was expected that the Express Entry would break the record of 2018 where total 89,800 ITAs were issued to Express Entry candidates. But, if we go by an explanation issued by the IRCC, this shortfall in the number of ITAs issued last year happened in order to meet the six months of processing time for all the applications for permanent residence.

This year, the Express Entry saw major highs and lows, which made the figures quite unpredictable for the observers. From 3,900 ITAs issued in the month of October to 3,600 in November and lastly 3,200 ITAs in December, there was no fixed pattern being followed in 2019 in comparison to 2018 draw sizes.

A defining development in 2019 was an IRCC’s deviation from the pattern, which it had established a year before that mostly saw draw sizes incrementally increased every two to three months over the course of 2018, from 2,750 to 3,900 ITAs.

Let s just wait and watch, whether the IRCC will follow a pattern of the frequent draw or larger draw this year or stick to the same unpredictable figures to meet the admissions targets set for 2020 and 2021.

But, for your surprise, there could be a further increase in the targets by 2023 as a result of the re-election of the Justin Trudeau-led Liberal Party. The Liberals have introduced new multi-year immigration targets in 2017 and are expecting to jump up to 350,000 ITAs by 2021.

We all know that ITAs are issued to those eligible Express Entry candidates who score minimum points or above on the basis of their core human factors like age, skilled work experience, education, English or French proficiency, etc.

Are you wondering what would be your chances of obtaining ITA for Canada PR in 2020? Discuss in detail with Canada immigration experts

At Canada PR Avenue, we believe in providing all the necessary information to our clients with regards to changes in Canada immigration rules and policies, latest invitation rounds, important dates and more.

So, while applying for Canada PR through Express Entry or PNP, you can be sure about taking a well-informed decision at every point by joining hands with our team of well-qualified and experienced visa consultants.