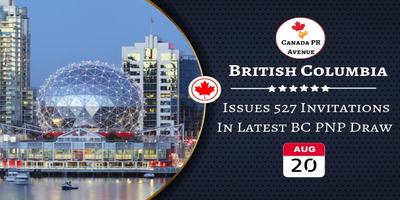 British Columbia – the key province of Canada has issued staggering 527 invitations in a single regular draw opened on August 20, 2019. It’s more than double the invites the BC issued in its previous regular draw of BCPNP launched on August 6, 2019, wherein the province issued just 238 invitations to apply for provincial nomination. Let’s find out more about the latest BCPNP draw.

The total number of nominations to be issued by a particular provincial nominee program is often based on various program and economic factors, including the Labour Market scenario. For the year 2019, the allocation to BC is 6,500.

Under the Base Category total 18 number of invitations were issued by BC, while for Regional Pilot stream, just six invites were sent. The province of BC issues the Entrepreneur category draws more frequently compared to any other category.

You may visit the website of Canada PR Avenue for inclusive information on the Canada immigration process.

Moreover, to get your eligibility checked through the expert and apply in the most relevant Canada immigration program, you may fill the free assessment form, so that an expert can call you with all key details. You may also send your queries to [email protected].